The longest riding day I’ve ever owned was a 750 mile stretch through South Dakota on my way across the country last year. The entire trip logged me 5,200 miles (clearly not the most direct route from east to west) over two weeks. That trip was done solo but this one I’ll have a wingman for the 1,000 miles down south and then whatever miles we decide to tack on after the first destination.

The trip:
Head down South from Boston to the Tail of the Dragon on the TN/NC border. One day, 1,050 miles and have to get there before the 24 hour clock finishes ticking. Earn my Saddlesore 1000 and ride the rest of Memorial Day with a sense of accomplishment.

The Route: Boston West through Albany and then shoot south to Knoxville TN through PA, WV and VA.

Over the next four days we’ll see how the road feels and make our way around the south through TN, NC, Virginia and back up through Maryland.

Bike preparation:
I’m riding a 2013 Harley Road Glide that has been through two oil changes and has just over 1,200 miles. It seems broken in-enough to ride and still has relatively new tires.

Personal Prep: I did a lot of running and high rep lifting to get ready for the ride. It’s amazing how much these long rides take out of me and I’m not even that old.
Three weeks prior to the ride I cut out coffee. It was not easy but definitely helped my alertness through the ride. Reintroduction to caffeine was welcomed but needed to come in small doses at first.

Packing the bike:
The bike has two saddle bags (normal size but remove a little size due to speakers in the lids), a 5 inch tourpack (great for transporting a pizza or something of similar dimension) and a rack on top of the tour pack for a travel bag.  People always think that you’re really limited on room when traveling by bike, but in reality the saddlebags (HD Hardbags) hold exactly the same amount of stuff that you could fit on an airplane carryon – a fact that became known to me when packing for a fly & ride.

With the exception of walk-around clothes, I made it a point to fit everything in my bike including my rain-gear, leathers (jacket and vest – I’ve become the guy who wears a vest and proudly admits it), heavy gloves etc. I also fit my sleeping-bag, a 2 man tent, small camping lantern, tools and flashlight.

The 5” tourpack contained items I would need frequently on the ride:
• Homemade Granola bars – I didn’t want to stop along the road much
• Caffeinated marshmallows – these things are phenomenal and have as much caffeine as a turbo shot in a D&D coffee. Makes it easier when you are pulled over for a rest and need a quick jolt of energy
• Runners energy gel packs (those made their way into the glove box with the granola bars to eat during the ride
• Water bottles
• Protein shots
• Thermos filled with rocketfuel (espresso usually)
• Maps
• Bandanas and a hat (winter as well as Sox cap)

Most people overpack for such a trip but over the years I’ve learned that I need much less than I would anticipate. In a 5 day trip (or longer), aside from the clothes on my back when I set out, all I need is:

1. 1 Change of jeans
2. 3 T Shirts
3. 1 Hoodie
4. 1 long sleeve T shirt
5. 1 pair of shorts
6. maybe a pair of sneakers (Chuck Taylors are preferable as they pack small)
7. toothbrush, sunblock, toothpaste, soap
8. Sox and Underwear are small to pack but are very easily washable on the road so I limit the amount of space used here.

The less you pack, the less cluttered your stuff will be. It’s important on this ride to know exactly where everything is so you don’t have to fumble around looking for something unnecessarily. 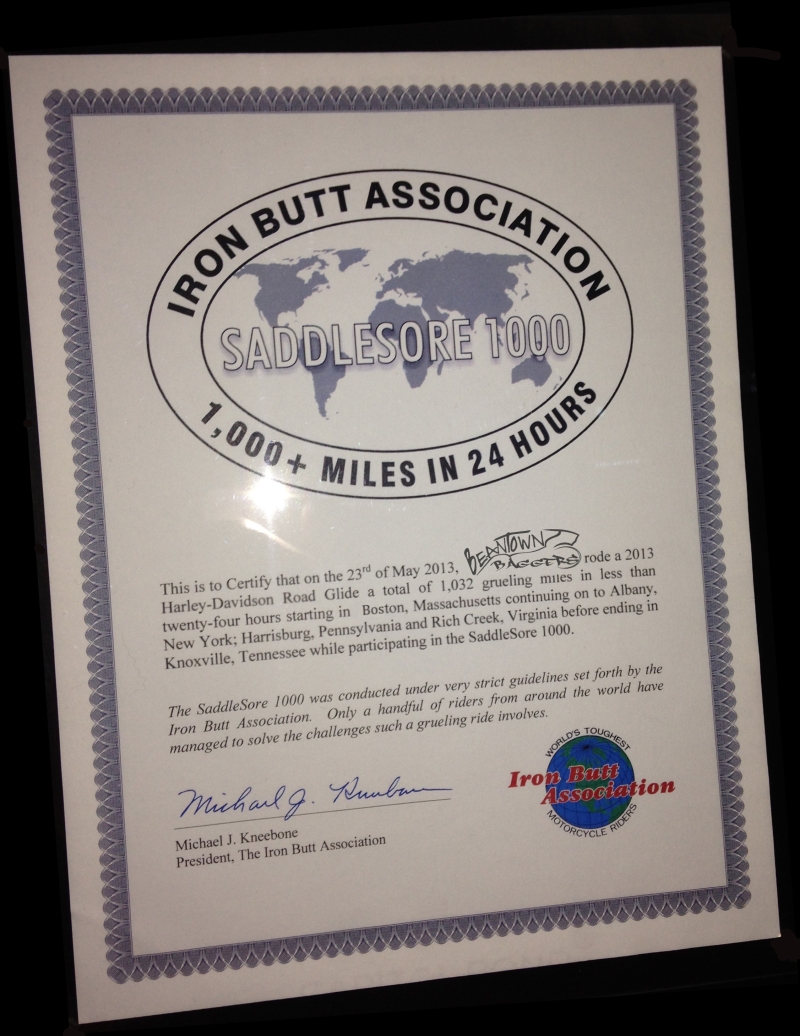