It was a chilly Sunday afternoon ride on April 4, 2010. The ride took a handful of us to the Cape and back and resulted in one of the oddest impromptu fixes I’ve ever had to do roadside!

After a day of riding and then stopping by some Fenway bars to grab a post ride beer, three of us were headed back to Eastie via Storrow Drive. I was in the lead and as usual, kept an eye out to make sure the two accompanying me out of Cornwalls with me were still insight. As the corners turned through Backbay toward Beacon Hill, only one bike was in sight. She and I pulled over next to MGH and waited for Ray, the final rider to catch up. Ray was never a slow rider, so as the minutes ticked by, we grew concerned. After 10 minutes we had gone by, our concern turned to fear for the worst. The only consoling thought was that nobody flashed us or pulled over to share dire news.

We made a U turn on Storrow and raced back, bracing for the worst.

My thoughts moved from concern to fear and ultimately to anger toward the person who may have been responsible for what I was about to see.

Just as my face filled red with rage I saw him, upright, safe and with his bike. Both rider and machine both seemed intact. I let off the throttle and eased back to the Eastbound side to meet my friend.

There he was, on a corner just off of Storrow Drive… Bike still running but not receiving any fuel. It was dark so we relied heavily on the beam from a 12” Mag Light to diagnose the problem. After a few minutes of examination, it was evident that the throttle cable had snapped from Ray’s Victory (he has since move to a Harley Davidson Fat Bob and another friend has inherited the Victory).

The choice was clear – we would select option #2.  The solution was less elegant than most techs would suggest:  We used lock grips to lock onto the remaining throttle cable and manually pull the throttle cable to get some acceleration.

This seemed insane but would be enough to ride the bike three miles home and another three miles to the repair shop.

What was the most ridiculous road fix you’ve done? Do you have any pictures? If so, share them on our Facebook page or email beantownbaggers@gmail.com. 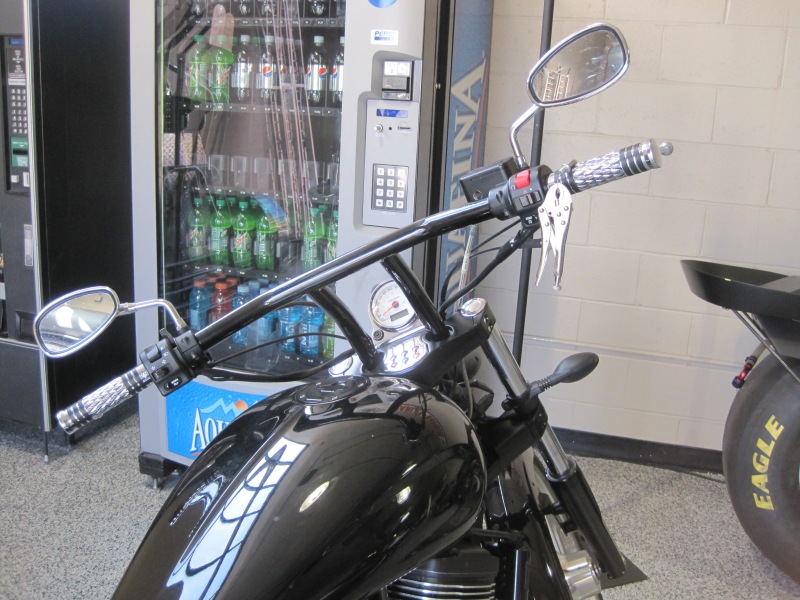