The definition of a perfect ride differs from person to person but a few themes will come up in every conversation.

Curvy roads, smooth pavement, great scenery and fantastic food are present in every great ride story. These tangible elements are simpler to describe than locate but with the right effort and dedication to mapping, good rides, even great rides are everywhere.

A truly perfect ride has one intangible quality. It is a feeling difficult to define but easily recognized. When a rider can mark the exact moment he escapes from the realities of our lives. It is the reflection on difficult memories and the development of aspirational goals. Our thoughts pivot from introspection to the tarmac laid by the two wheels inches below our saddle.  The focus is the ride as we start a bend outside and finish inside -all energy is dedicated to breaking, shifting, accelerating. There is no longer time nor need to reflect on life’s pressures – there is only an opportunity to be absorbed by the texture of the pavement, the scents of the surroundings and the sheer unadulterated beauty of the scenery. A scenery that is not merely a backdrop but rather the canvas enveloping the rider, creating an impossible decoupling of operator, machine and environment. {MORE BELOW}

Over time I have been fortunate to ride the Tail of the Dragon in Tennessee, the Blue Ridge Parkway from Virginia to North Carolina, Independence Pass in Colorado, Beartooth Pass in Montana, the Intercostal Highway in Florida, the Pacific Coast Highway in California, the Redwood Forrest starting at Grant’s Pass Oregon and countless other roads that each in their own right could be somebody’s definition of the perfect ride.

20 years of riding and many, many memorable days – maybe more than most deserve in a lifetime. Yet every ride has always left me wanting more at the end of the day. I had never experienced what I would define as the perfect ride…not until now.

A few weeks ago we shared some of our rides from the Blue Mountains of Australia. This was a track just outside of Sydney that took us to some of the most scenic spots my eyes have experienced. Based on this experience it seemed sensible to make a return trip to the Eagle Rider Sydney shop and speak with Simon (the manager) about other rides in the area.

“Ride Putty” he confidently decried!  Simon’s sidekick, Mick vehemently agreed. (Side Note, ever since I watched Crocodile Dundee I’ve always wanted to meet an Aussie named Mick).  They made sure that we were well outfitted for our ride.  By well outfitted I mean they didn’t give us stock bikes and instead offered a nicely appointed Streetglide and a Roadglide with a Stage 4 kit.  Most rental shops wouldn’t even carry these much less trust us with something so valuable.  If anybody finds a place as welcoming and helpful as Eagle Rider Sydney, please tell us because that’ll be our next fly and ride. 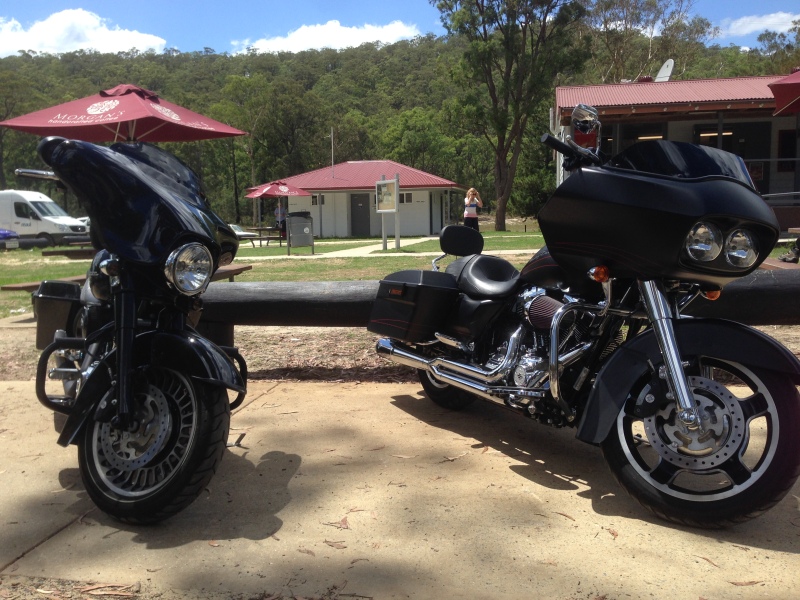 Putty Road is a stretch that crosses Australia’s Wollemi and Yengo National Parks. It runs from the West of Sydney to the North culminating at Sydney’s Hunter Valley wine country. The ride back is just as picturesque, exciting and unpredictable as the ride out. The distance is a perfect 300-mile day almost completely void of highways and traffic is a word without definition in these parts.

The route had so many different facets switching from a background most closely resembling the Texas Hill Country (Austin to Fredericksburg, TX) to the farmlands Southeast of Montreal to the rolling hills of the Napa Valley. The path traversed mountains and overlooked oceans. I once read a verse that read: “the roads were like ribbons, gently draped across the landscape”*. More perfect words have never been articulated to describe the topography of a journey.{MORE BELOW} 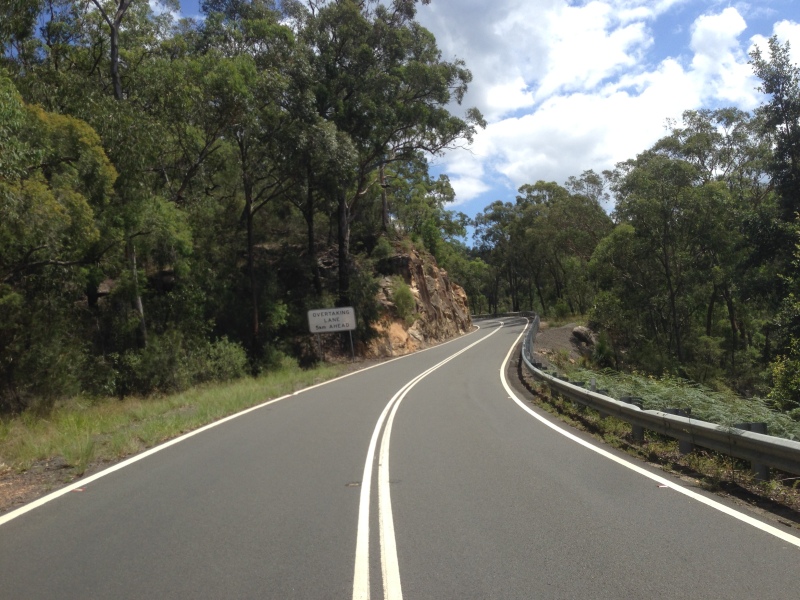 From Windsor, New South Wales up the aggressively winding Putty Road immediately crossing over the Colo River resulting in a roller-coaster of tree lined roads. As we ascended the first hill the trees turned to a sheer rock face not more than one foot off the left side of the road (remember, in AU they ride on the left). One false move would send our bars into the rock and our bikes out of control.  The risk was a rush! {MORE BELOW}

After 75 miles of a yeoman’s effort to ruin the brand new floorboards on our glides, we saw a sign ahead that  read: “Grey Gum Café – next stop 65 Kilometers.”

It was 80 degrees, hunger and thirst had set in. There didn’t seem to be a lot of options so the Grey Gum would have to do.

As we approached the café, it seemed like more of a reservation than merely a road stop. A 200 yard gravel driveway led to motorcycle parking on the only slice of pavement on the sprawling property.

After dismounting the bikes we ordered some of the local grub which included Focaccia (their name for sandwiches that come on the namesake bread) and burgers, meat pies and coffee. Breakfast was available but by this point, we were past a reasonable breakfast time. The food was very pleasant and the service was more than hospitable. Kim, the manager spent a bit of time helping us map out the rest of our route and shared stories of other travelers who stop through. If you want to eat, drink or relieve yourself, the Grey Gum is your best (only) bet on Putty Rd. It is inconveniently located smack dab between civilization and wine country and though it is not a destination unto itself, the Grey Gum has a near perfect track record in attracting anybody who ventures up Putty.

The roads north of the Grey Gum Café were even better than the first part of the ride. Signs indicating: “Bends next 15 KM” were strategically posted on various curves. The surface was flawlessly even despite being grittier than we experience in much of North America. Threat of animals interrupting our lines was real, a fact punctuated when we passed an enormous Wombat that appeared to have been freshly slain by a motorist. Check out the video of this ride and the dead Wombat.

After another hour of white-knuckle adventure, the wooded area came to an end with big skies and expansive vineyards allowing a brief refrain from the palm sweat driven by the past 200 miles.

We happened upon a vineyard highlighting tastings and cheese. This was not the normal Bagger Rest stop, but a dessert wasn’t out of the question. Besides, what a great photo opportunity with our rented baggers! 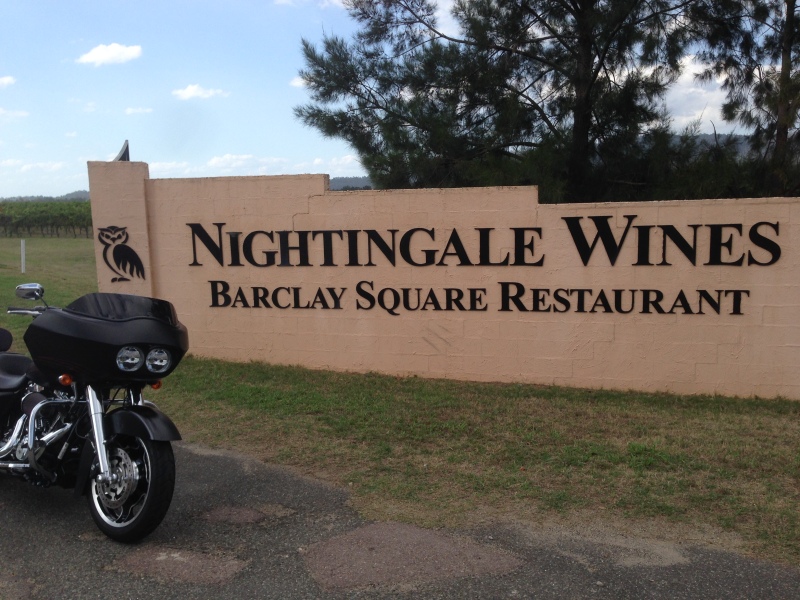 Nightingale Wines and the Barclay Square Restaurant would provide the required nourishment only available through fresh mangos soaked in sparkling wine topped by a scoop of ice cream. Add a double espresso and you’ve got a heart attack waiting to happen!

Before leaving the vineyard we took a few minutes to snap some shots of our bikes (which were well appointed for rental cycles) and then set out for the last leg of our ride.  {MORE BELOW} 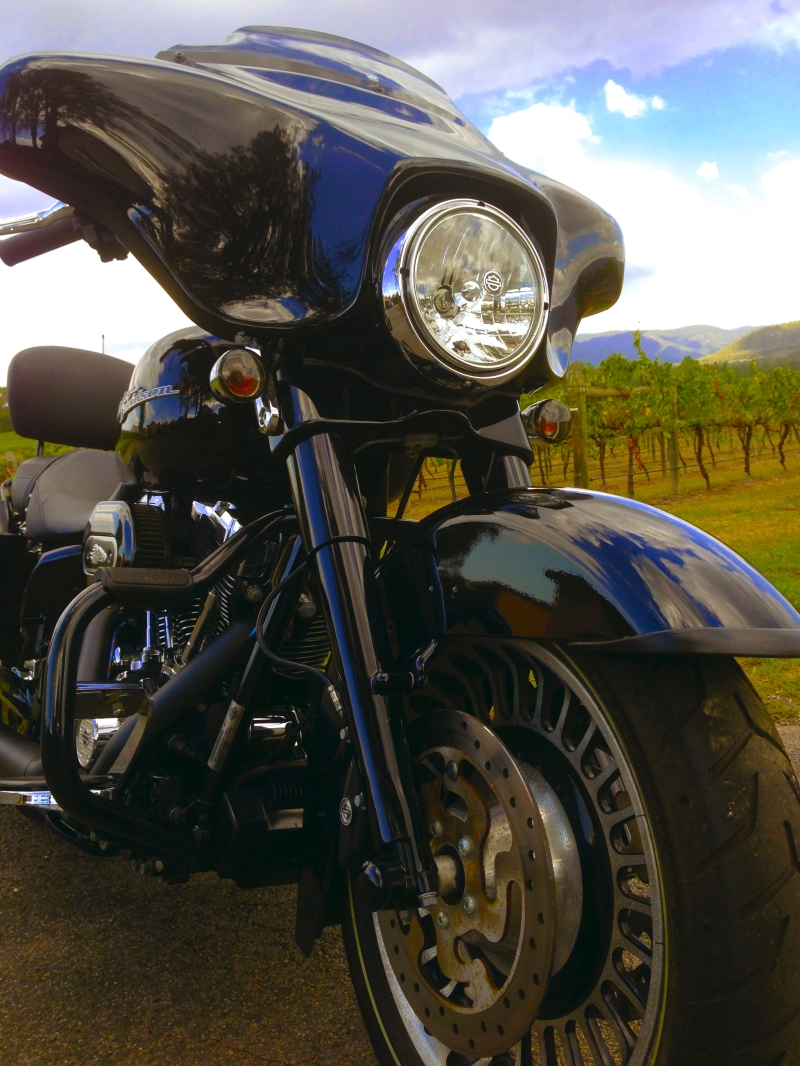 From the Hunter Valley we took Paynes Crossing Rd South to a small town called Wollombi. From there we took Peats Ridge Rd where we were faced with a choice. There were two roads back to Sydney: the Pacific Motorway (M1 toll road) or the Old Pacific Highway. Any self respecting road warrior would know that a road that labeled as “old, pass or parkway” will offer more enjoyment than one that indicates “Toll ahead”. We opted for the Old Pacific Highway and were not disappointed in our choice. Not only was the road full of twisties but it gave us our first views of the ocean all day! We continued on this very technical road until hitting the main roads and finishing the day in front of the Sydney Opera House – beer in hand.

More Photos from the ride below: 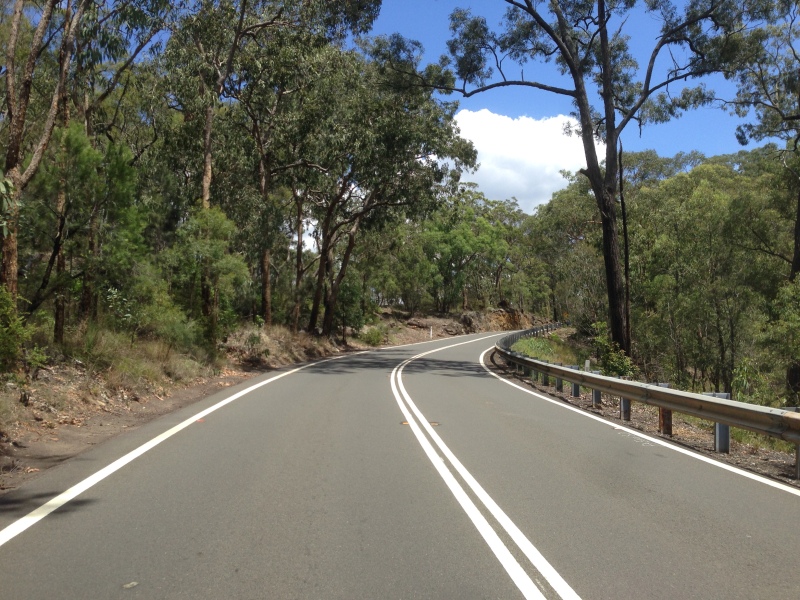 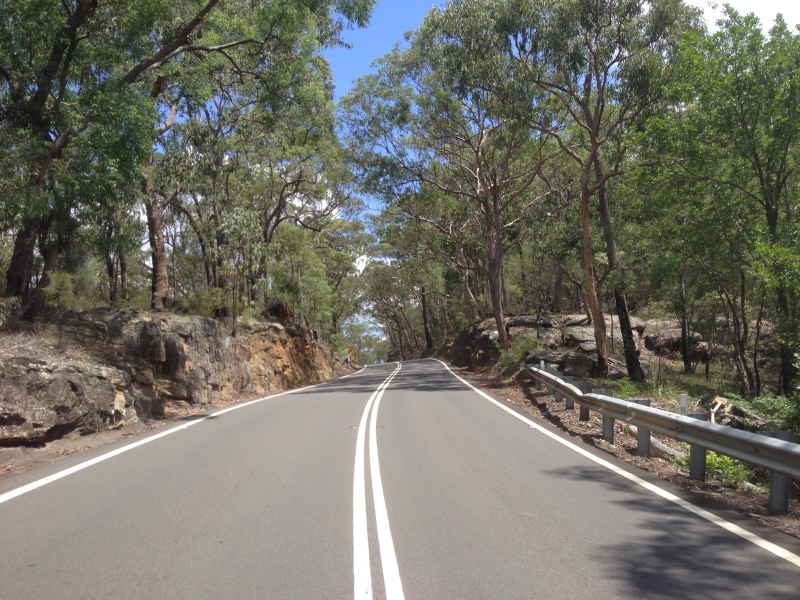 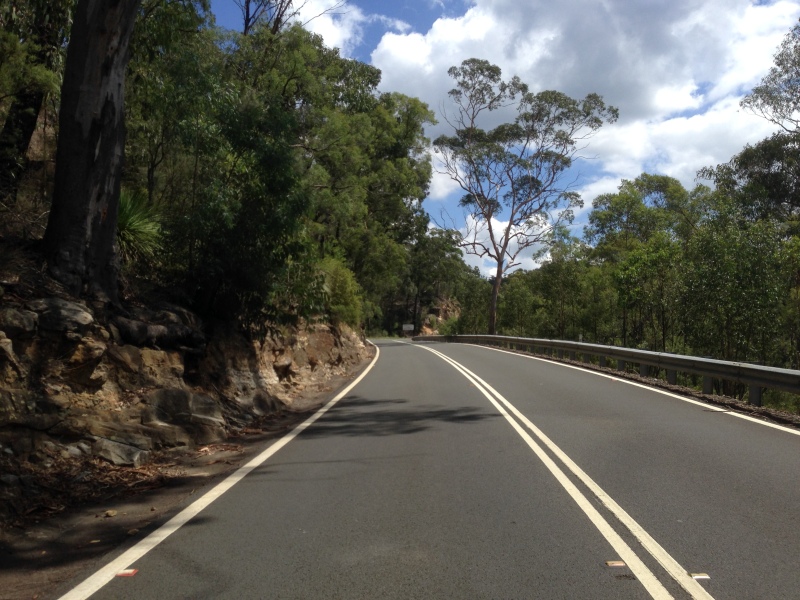 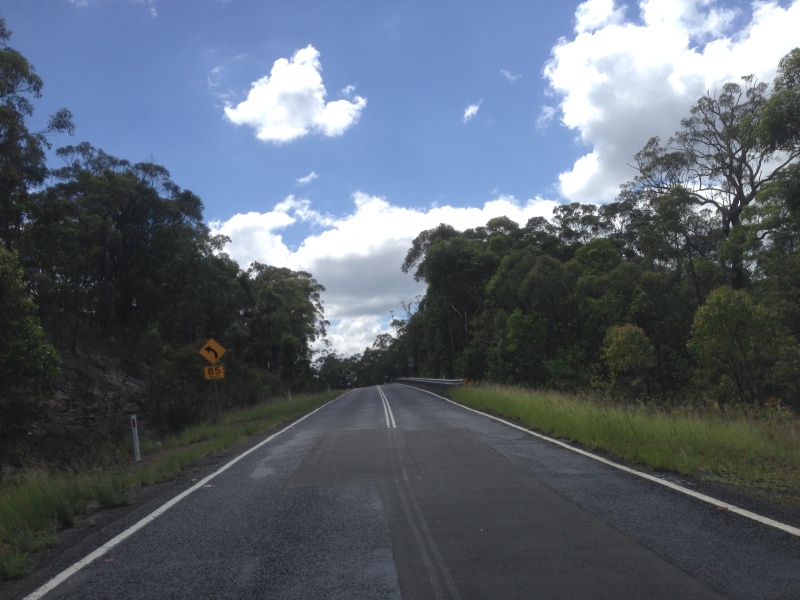 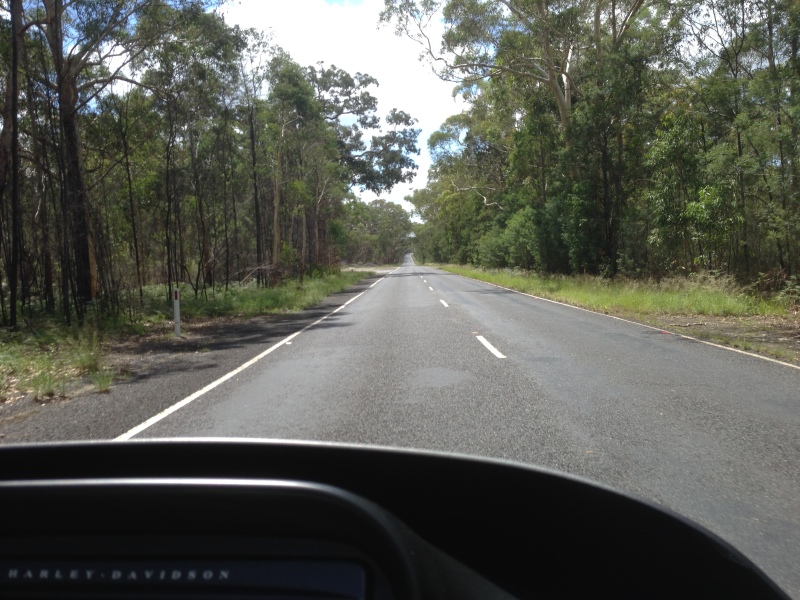 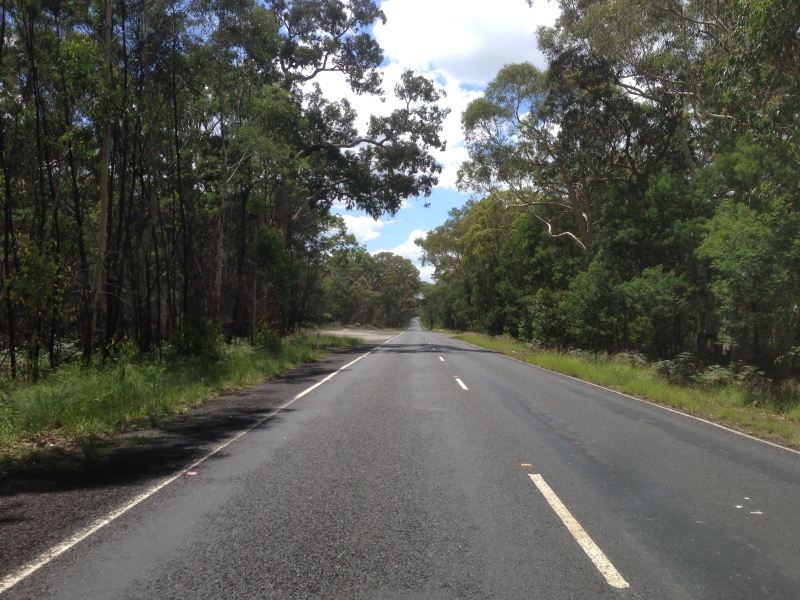 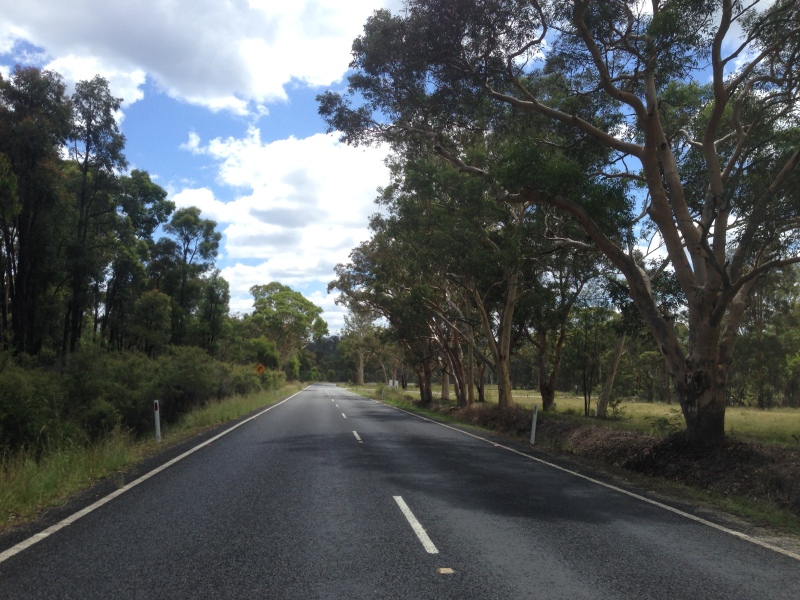 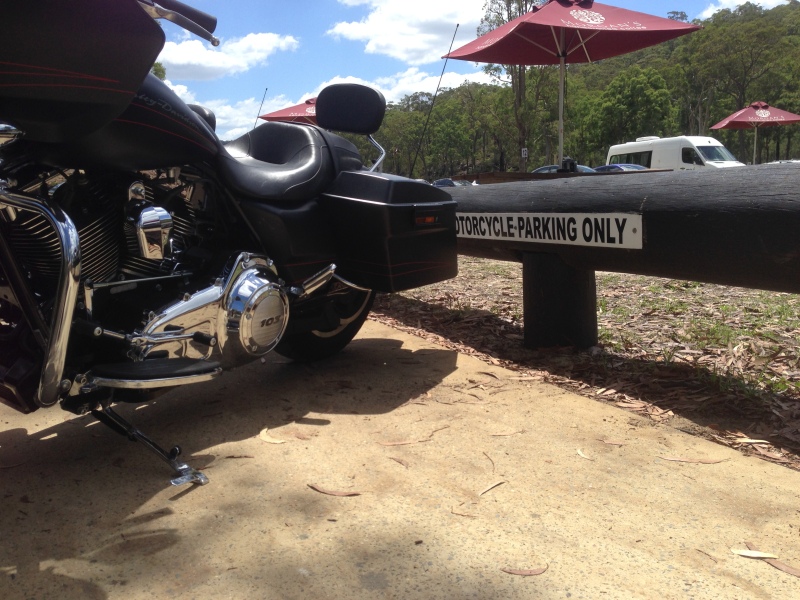 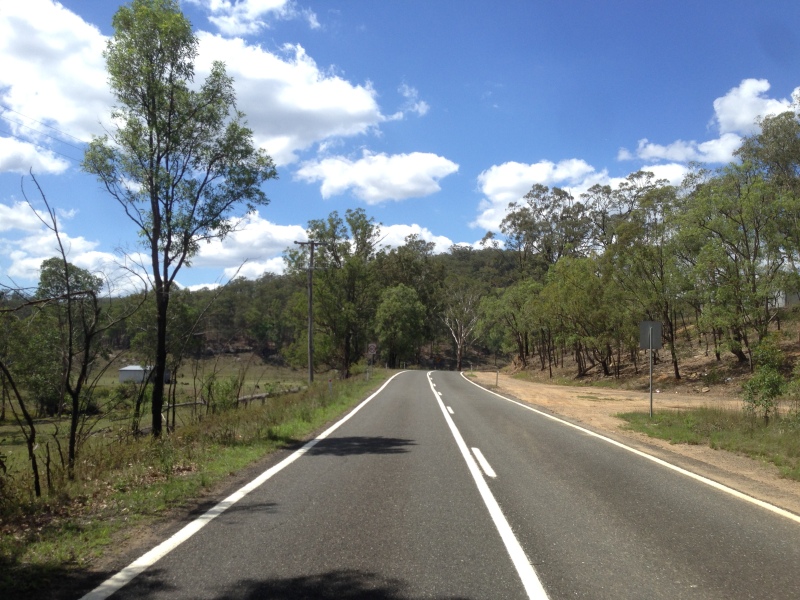 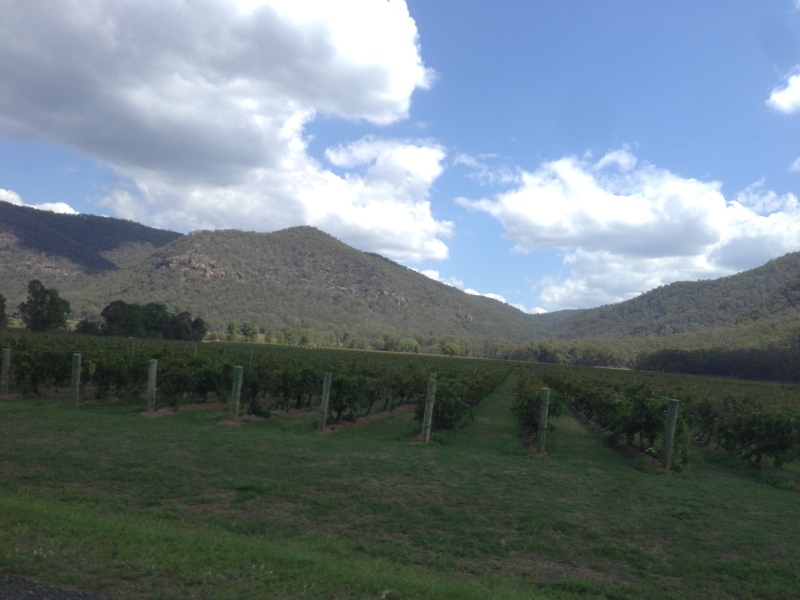 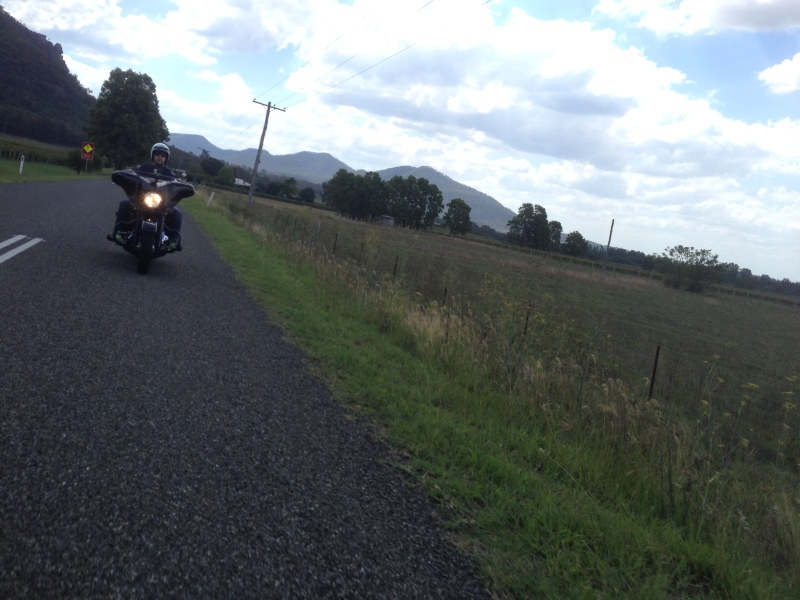 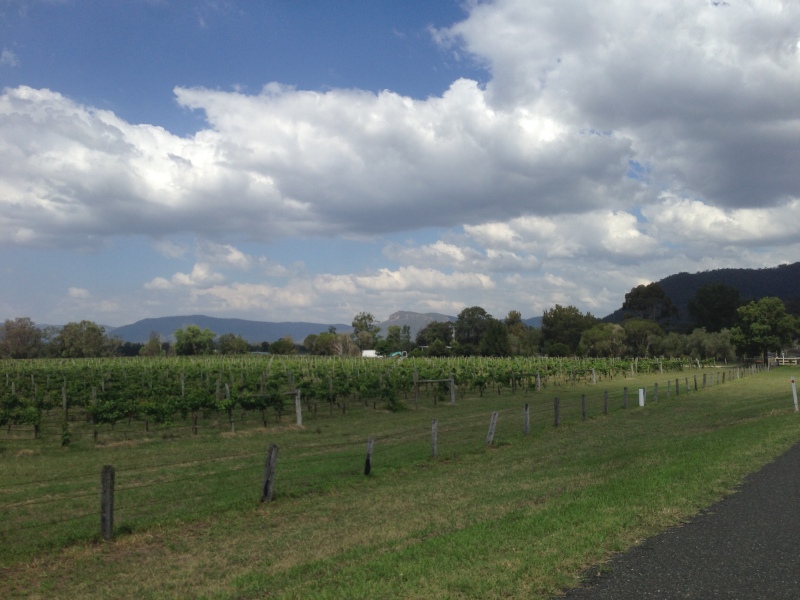 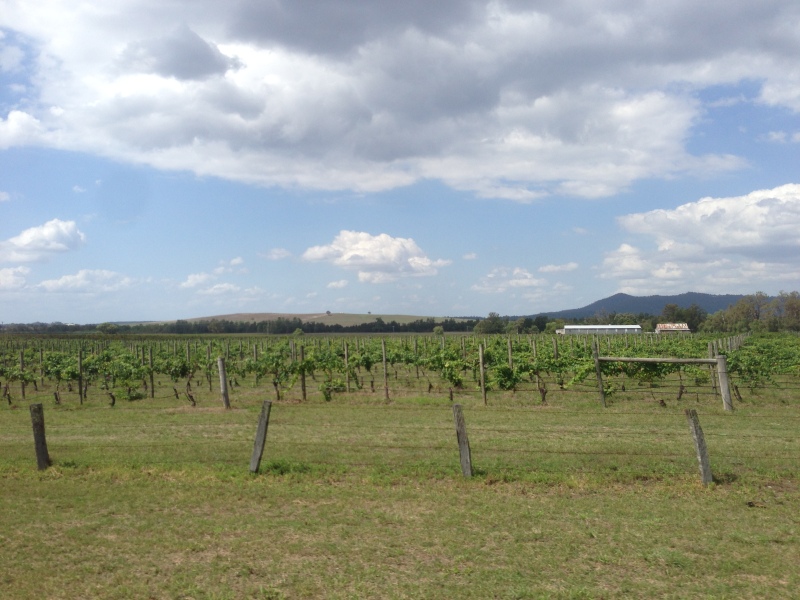 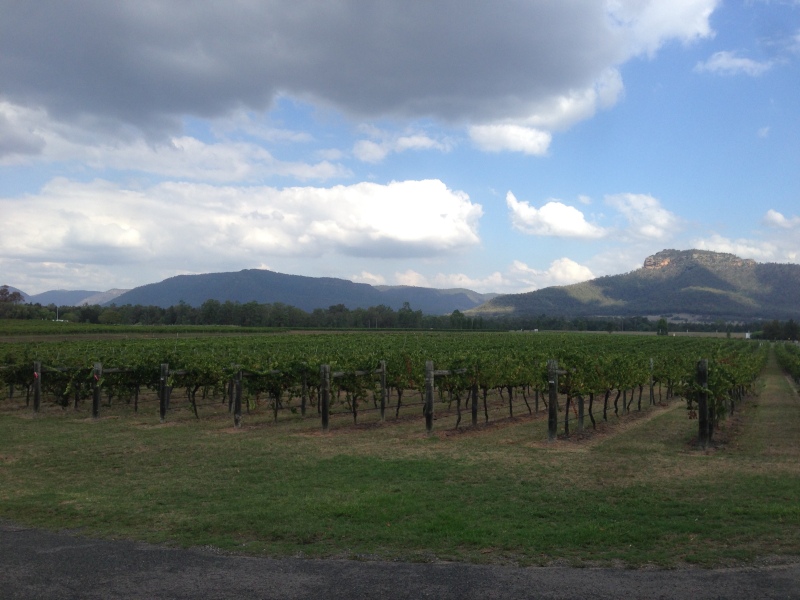 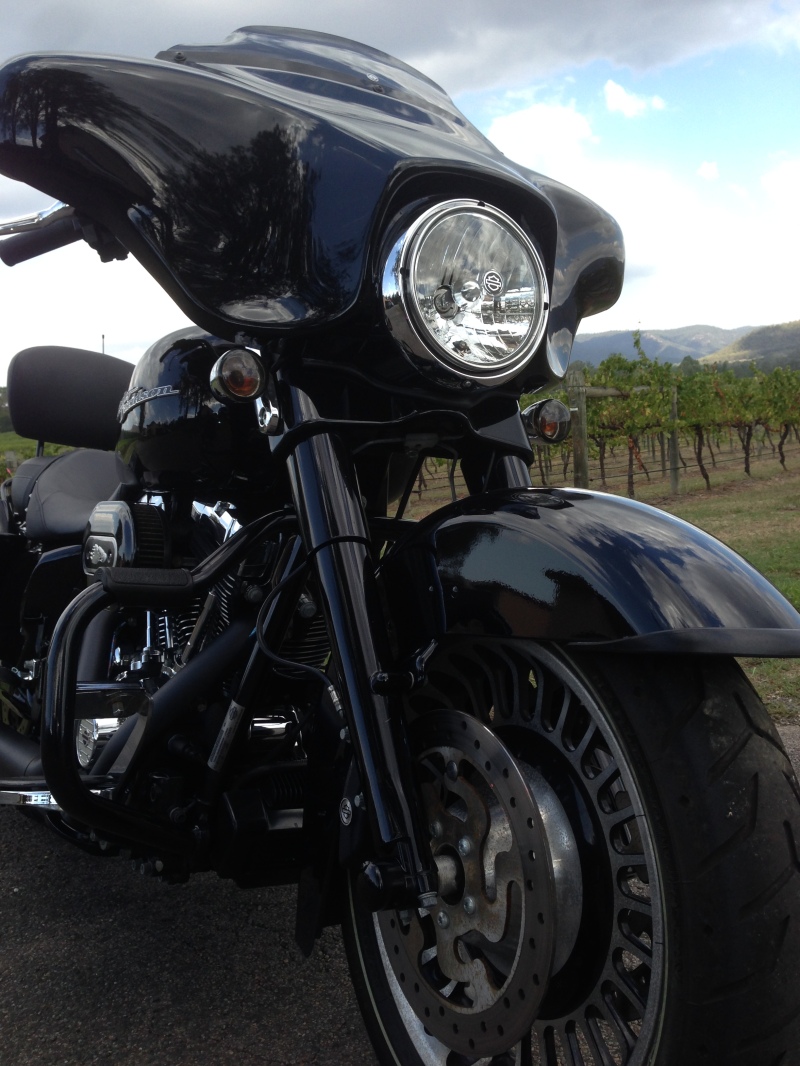 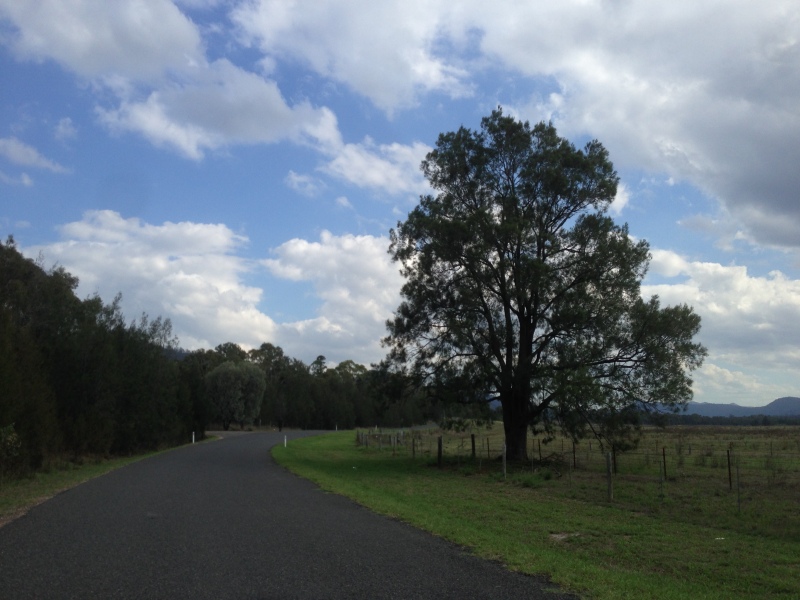 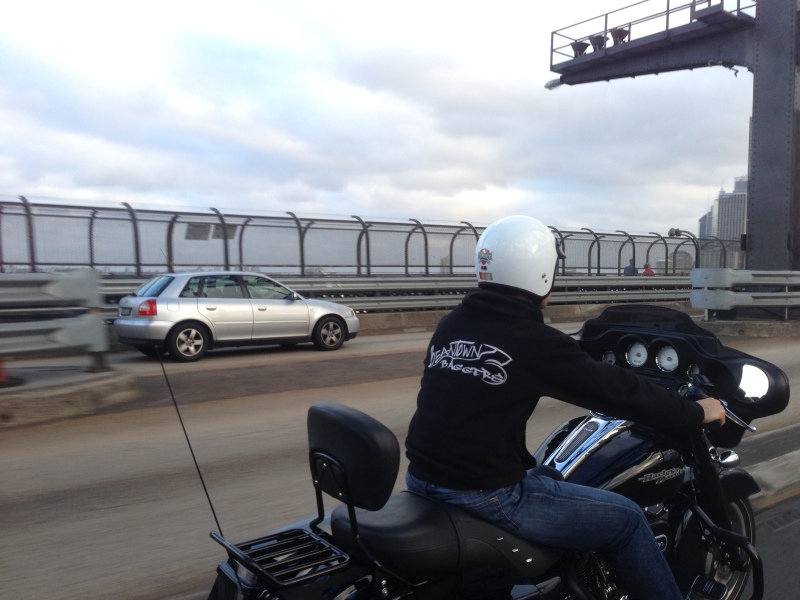 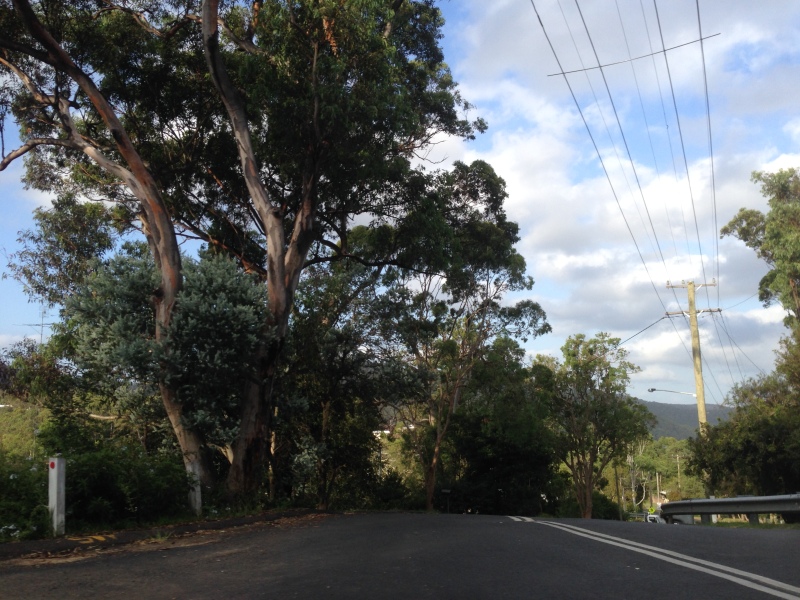