Last night I went to my local cigar shop to have a glass of Highland Park 18 and smoke some cigars that I hadn’t in the past.

I started with a Perdomo Habana (5 Inch 52 gauge) cigar. I have smoked Perdomos in the past and remember them as packing a serious kick. I went with a punch cut to avoid too big of a draw from such a wide gauge smoke. The wrap was maduro but smoked like a medium body cigar. This cigar was smooth, with a little spice and had a light aftertaste. It went phenomenally well with the mild scotch that I had chosen.

My Fiance smoked a Perdomo Robusto Lot 23 from Nicaragua. We used a straight cut as it was a lighter wrap and likely only 48 gauge.

A few pulls into her cigar she looked disappointed. It was harsh so we traded cigars.

The harshness of the Lot 23 was just the beginning. The cigar unwrapped quickly and had to be relit a dozen times before I finally gave up. On top of this, the label didn’t peel off smoothly and felt like a cheap dot matrix print job tacked together with crazy glue. The entire cigar was just terrible! I would never buy this one again and it is a far cry from it’s cousin that started my evening.

That Perdomo Habana 52 smoked throughout, never needing a relight. Even at the end, it wasn’t overly harsh and seemed to be a great quality smoke.

I was disappointed and couldn’t end my night with that terrible cigar, so I opted for a second smoke.

This time I wouldn’t take any chances. I went with an Ashton VSG Torpedo 6”($27 cigar at this slightly over-priced shop) but if burning thirty bucks could ever be considered “worth it”, this definitely was.

From the moment that I cut the stick it showed great craftsmanship. It didn’t unravel, held the light (only relit twice – not a bad showing especially as I was smoking a little slower) and had an aggressive bite that a Maduro should have. It drowned out the scotch and would be better paired with a more peety Talisker or Lagavulin. It wasn’t the perfect cigar but was pretty close 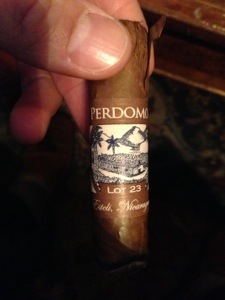