The Journey:
A few weeks ago we asked our readers where they would ride if they had no financial constraints and received a full blessing from their other-halves. Many people suggested Europe… so this is what we’ll be documenting for the next two weeks.

Beantown is traveling from Boston to Madrid, across the South of France to Italy, down the Amalfi Coast, up to and across the Alps to the Pyrenees and back to Madrid via San Sebastian. This route plan is 4,000 miles and will take every last minute of the two weeks allocated.

The Start:
The most efficient way of traveling to Europe in advance of a road trip is a redeye flight to Madrid. The flight leaves Boston around 5:30 PM and arrives Spain at 6:30 the next morning.

After a little time at customs and hotel check-in, you have ample time to grab breakfast and pick up your rental bike.

The consummate trip planner, my Harley Davidson Electra Glide was booked two weeks ago. I chose the Harley for reasons of practicality alone and sadly not for blind brand loyalty. Packing for a HD touring bike is a universally adaptable skill set – I would know exactly what would fit on the machine and where it should go. Such is a delicate balance of packing everything you will need while limiting inaccessibility of your gear. With this said, renting the HD was going against my better judgment as I remembered visiting a Harley shop in France a few years ago and leaving with the confidence that I could build a more mechanically sound bike than those techs (to be clear, this is a very bad thing). Though HD is an internationally respected brand, international technicians don’t have the long history with these bikes that you find in the US. Regardless, there was a tinge of excitement as I considered showing off a specimen of American craftsmanship to all Europeans who would encounter me along the road.

Finding the Eagle Rider bike rental shop was no easy task because these rental outlets are under a different brand in Spain. Once I arrived, I was pleasantly surprised to see my Glide sitting front and center of the sidewalk. This well broken in bike had seen better days – dinged and weathered beyond belief. Concerned, but yielding I signed the papers and spun the bike around Madrid for an hour. It was soon clear that the front rotor was warped, the throttle cable sounded as though it would pop at any moment and the front suspension was all but non-existent. This bike would have to go back. 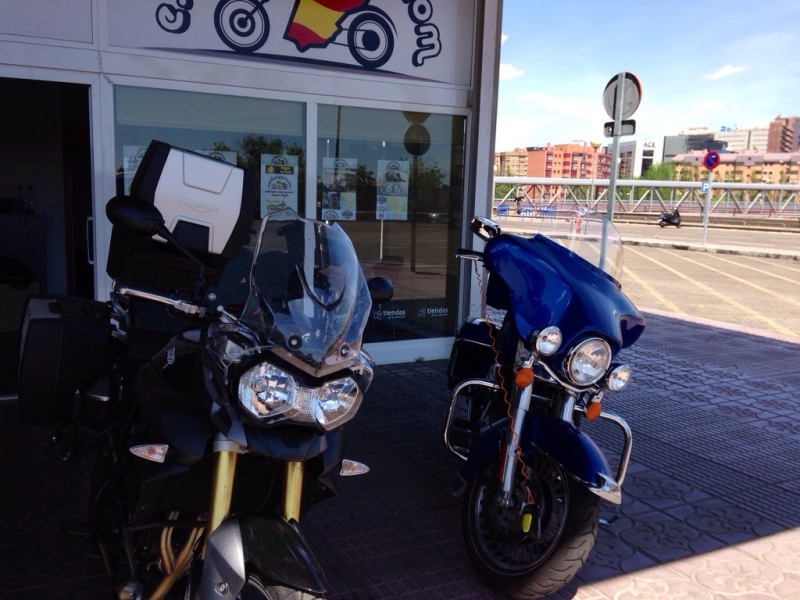 When I returned to Eagle Rider, the proprietors were incredibly considerate and shared all of the alternative bike options (which were limited due to the perfect 79 degree riding weather in Spain this week). My steed would be a Triumph 800 Tripple outfitted with saddle bags, a touring pack and windshield. A far cry from the V-Twin to which I’m accustomed but seemingly a much more reliable partner for a 4,000 mile journey. Sharing the photo of the Triumph with others I was told I’m riding an angry bug with wheels. Maybe so, but my confidence in this bike’s reliability over the next two weeks is much higher than if I were still on that busted-up HD. 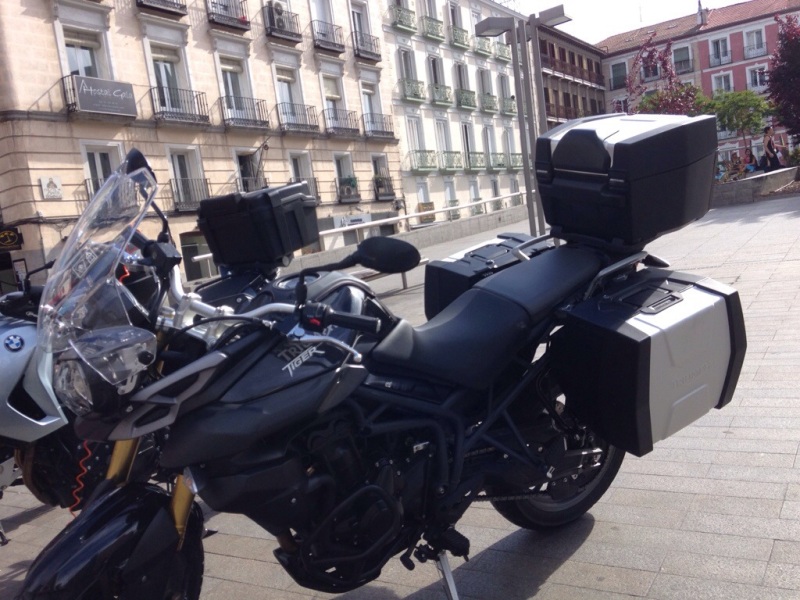 The rest of the day was filled with incredible Paella and lemon pie served in Mason jars to be followed by a few beers hopefully leading to a restful night.

Next Up:
Madrid to Barcelona tomorrow. 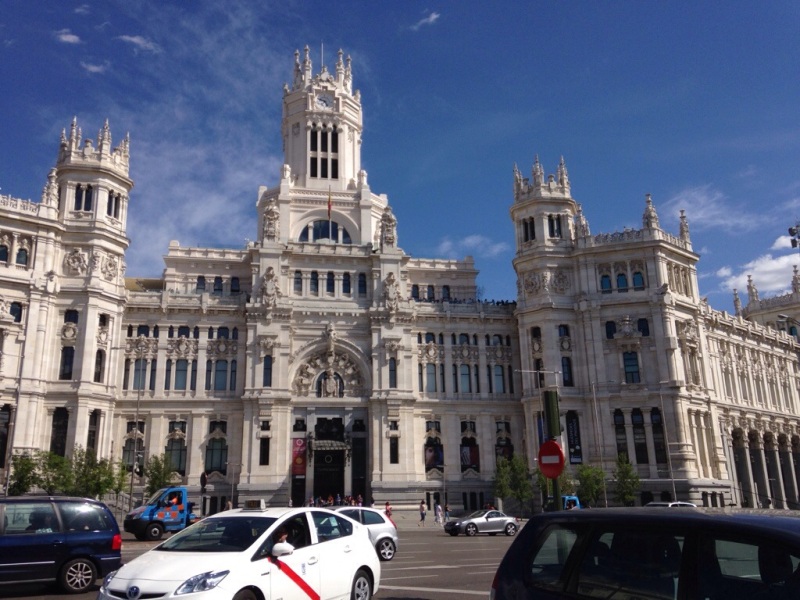 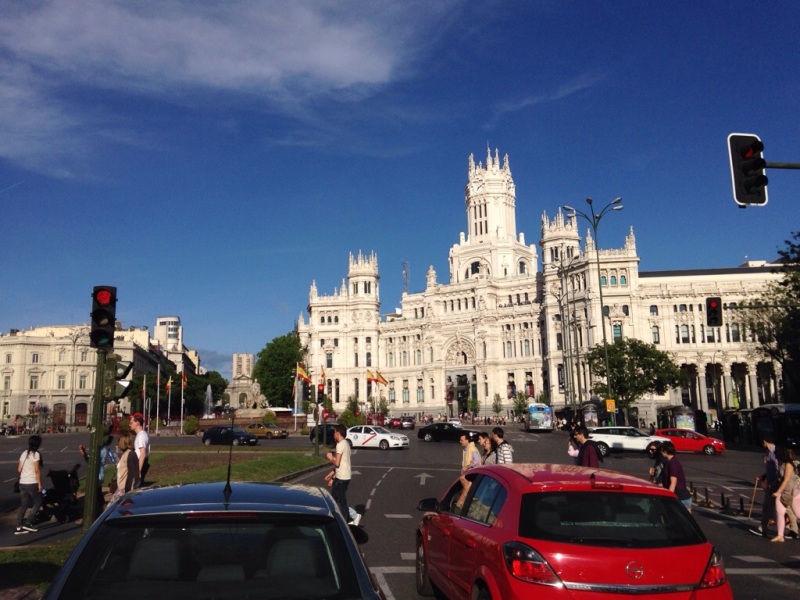 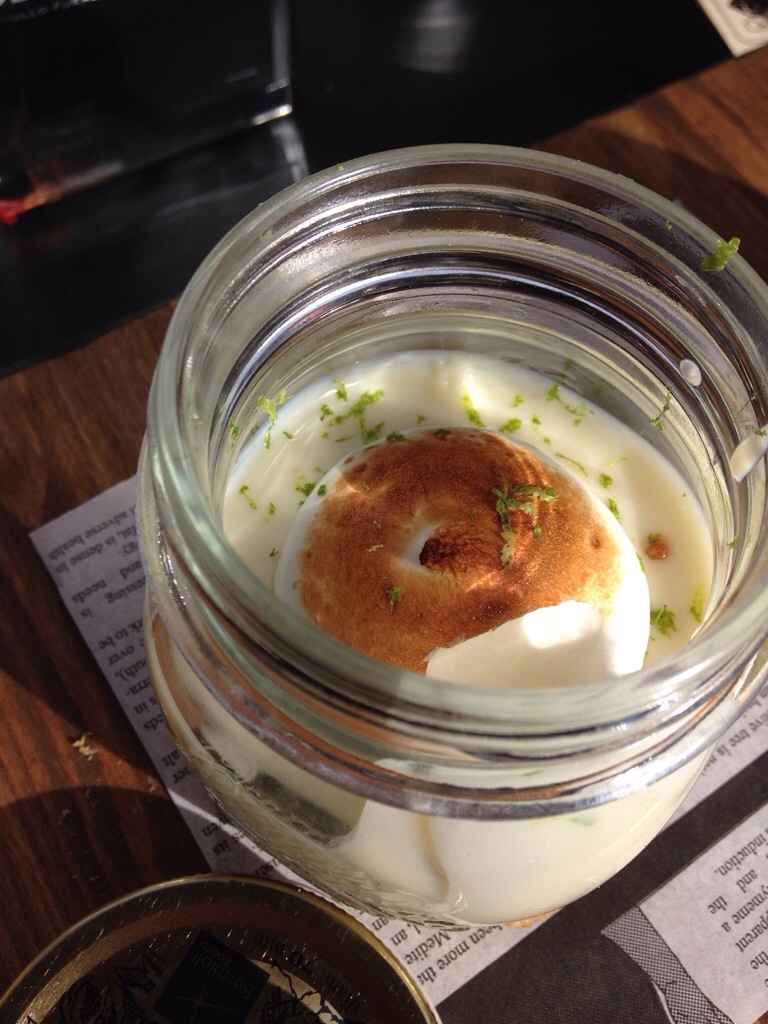 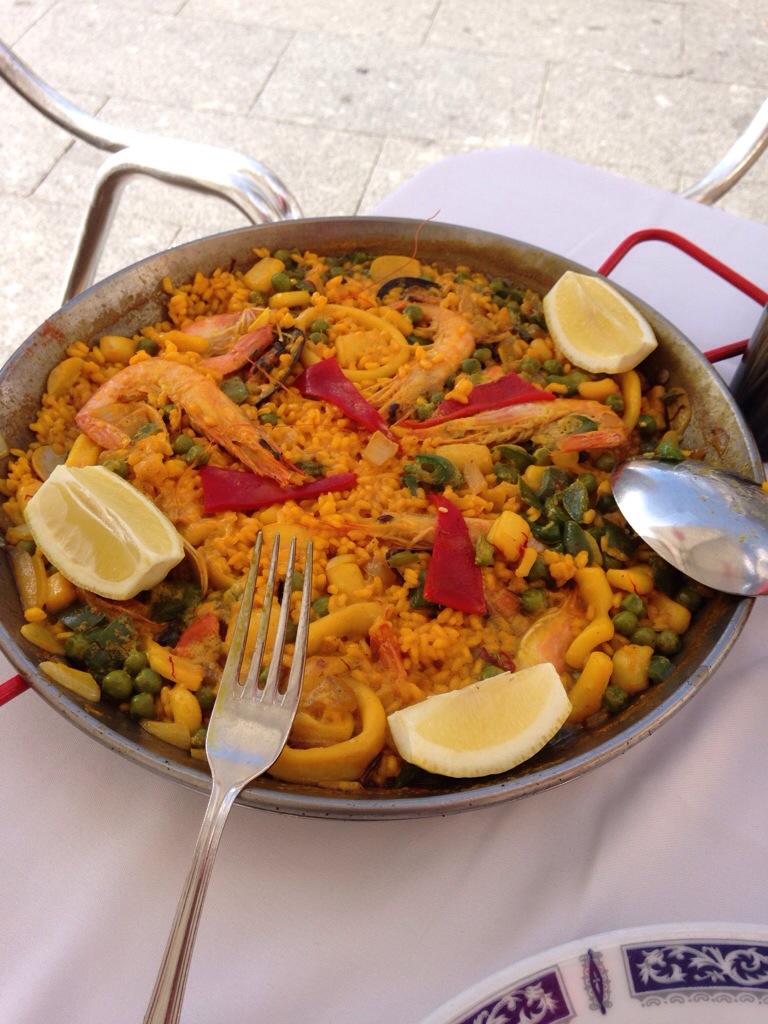