We preface this piece by acknowledging all that is unique and innovative in the motorcycle industry.  What is one’s prized possession and ultimately an expression is another’s bad dream, though often it takes a mishap to stubble upon a way to do something better.  And perhaps this is where we witness the creation of trends (or the death of them).

Here, we examine the powerful laws of restraint; not about knowing when to throw in the towel, but when to call it.  There’s a distinction here as the first denotes failure whereas the latter is a simple acknowledgement that you’ve achieved a point of balance.  Zen, shall we say?  (more below…) 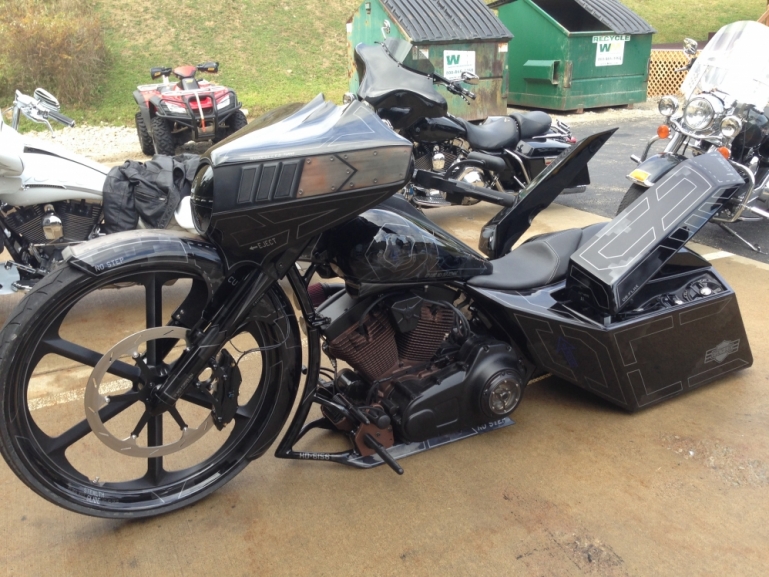 Too Much or Just Right??

Do you remember that last time a joke which was already hilarious went too far, when you fell victim to peer pressure on those last couple rounds of Bud heavy’s and shots of whiskey, or let your pride get the best of you during that last set leaving you injured and unable to get back in the following day?  Of course you do.  We do too.

When the money is there, the upgrades and updates seem endless as our preference changes through the years and new components are consistently arriving in market. Simply put, it feels like people get carried away…which is an understatement.  Does it seem odd that a motorcycle that has no historical value, no interesting story sells for nearly $80,000?  Adding, one that can’t be ridden other than down the street and maybe back through a cul-de-sac assuming the roads are as well kept as they are in West Palm Beach.  Furthermore, one that with it’s paint job appeals to a fraction of the market.

A bagger we’ve highlighted in the past.

Is it fair to say, the finished product was unintended?  We’re not here to make that call, but surface that it’s a possibility.

We do feel that often, people get away from what motorcycling is about – riding.  Looking cool is a nice-to-have, but when it gets in the way of putting on hard miles through the mountains, we’ve lost our way.  This season, we called out this was the year of the rideable bagger.  There were choppers, there are (still) custom baggers with huge front wheels, now is the time for those who ride to come into the foreground.

If you’re building a bike to sell it, think about remodeling a home.  Would you put in $500k of work to a house you purchased for $250k in a neighborhood whose median sale price was $300k?  Take a step back and ask yourself, would this bike which is already a depreciating asset be better off with $45k extras that appeal to a fraction of the market and makes it unridable OR should I tone it down, focus on rideability put the rest towards a second bike?

A “done up” bike, but built tastefully (ironically however appealing to only New Englanders)!

Having a vision and sticking to it can be challenging in the moment.  Not all athletes are cut out for the pros, but of those athletes – how many of them could have been had they focused, had they stayed injury free?  With bikes, it’s a bit more cut and dry adding it’s all within our power for them to be road worthy, filled with grit and abused.